Are you a UK exporter looking
to grow your business?
Now is the time to invest in the Philippines.

Looking for an ideal place for your meetings and small group trainings?


Our Business Centre is the right place for you!

What do our Members say about us?


"The location is convenient and traffic is not an issue."
Previous Next
loading... 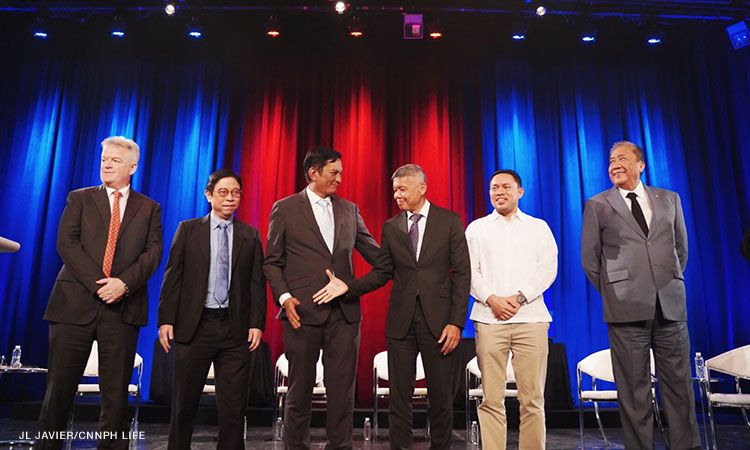 Metro Manila (CNN Philippines, August 28) – The private sector is equally enthusiastic about the government’s grand plans to develop roads, bridges, and mass transport, but challenges lie ahead in the road toward the “Golden Age of Infrastructure.”

CNN Philippines again gathered government officials and private sector representatives for part two of “Building for the Future,” where they assess the progress of the government’s “Build, Build, Build” program at the halfway mark.

Businessmen attested to collective support for the state’s flagship projects, saying there’s definitely strong interest among both local and foreign investors to ride on the Philippines’ booming economy. For them, addressing the long-neglected infrastructure gaps is key, but getting there would not be a walk in the park.

“We fully support infrastructure like a lot of the chambers, but I think the challenges you face are very hard,” said Chris Nelson, executive director of the British Chamber of Commerce Philippines. “We fully endorse the direction – I just think the challenges are growing even more because the private sector is also going very strongly, which is great for you (government) to try to meet.”

The Duterte administration is pouring over ₱8 trillion to build 75 big-ticket infrastructure projects until 2022. The goal is to improve connectivity and mass transport to spur economic growth, create jobs, and lift millions of Filipinos out of poverty.

Foreigners have been captivated ever since the government unveiled its grand plans under “Build, Build, Build,” with Nelson noting that the crowd of businessmen drawn to the Philippine government’s economic roadshows in London have doubled over the past three years.

However, this “tremendous” interest has not yet translated into billions of dollars of capital inflows. Nelson said it’s all because of the “lack of certainty” in terms of investing in the country, which has a handful of restrictions on foreign equity as well as looming changes to the tax regime.

“What’s missing is private sector corporate response to public sector stimulus,” Salceda said during the panel discussion. He referred to a study involving the capital expenditures poured by the top 10 biggest conglomerates in the country, where he saw some ₱1.57 trillion pledges against ₱5.7 trillion from government.

Ferdinand Pecson, executive director of the Public-Private Partnership of the Philippines, said there are 21 projects which are under joint financing and construction mode. He advised potential investors to look into supporting local projects and even improvements to state-run universities.

As for local businesses, one group thinks the state-led spending spree has had a ripple effect.

“The corporate sector has never experienced growth like this. They never had bigger investment plans than now,” said George Siy, chairman emeritus of the Anvil Business Club.

The government’s ambitious infrastructure plans hit a snag earlier this year, as the delayed approval of the 2019 budget left new projects unfunded in the first four months. This has hurt overall growth, which slumped to a four year low as of June.

But the President’s economic team is not disheartened, with Transportation Secretary Arthur Tugade and Public Works Secretary Mark Villar ensuring that they are well on their way to catch up with full-year spending targets.

“There obviously was some delay. We don’t consider it as insurmountable issue, but a challenge,” Tugade said. “We caught up right now. For some projects, it’s advanced.”

The Transportation chief said he has tapped multiple contractors to work on different components of projects, while a 24/7 work scheme has been employed in priority construction to make up for lost time. Salceda added that Congress is poised to extend the validity of the ₱3.7-trillion budget by nine months to give agencies time to release the money for projects left hanging.

Tugade said the delayed budget held back about a third of transport projects, but they are getting back on track. He claimed that some train projects, including the country’s first-ever subway system, is even two months ahead of schedule.

Funding for 2020 is not a concern. Salceda allayed fears of another budget fiasco, saying the spending plan will clear Congress on time. As for the rest of the projects, official development assistance from foreign partners will provide support.

The Cabinet officials also said there won’t be a surge of foreign workers, especially Chinese, due to loans secured from Beijing. Tugade said there will be Chinese workers brought in, but “not in the magnitude people expect it to be.”

The Philippines has signed two loan deals with China – the Chico River Dam irrigation project and the New Centennial Water Source – Kaliwa Dam project – but only the former has been started.

Both Tugade and Villar admitted that they would not complete all 75 projects by 2022, but both promised substantial progress three years from now.

Villar said a “supermajority” of the identified road and bridge projects will be done before Duterte steps down, while Tugade said he’ll be “happy” to see as much as 75 percent of the pipeline cleared.

Tugade added that the government can always offer partial operability, or opening portions of the train lines and ports that will be completed soon. He pledged that several stations of the proposed subway will be open to the public by the end of 2021, and that the Mindanao Railway could make its first trip in the next three years.

“There is a lot of interest that the growth story of the Philippines is getting there. Even if they achieve 75 percent (of the Build, Build, Build projects), that’s a great story,” Nelson of the British Chamber said.

As of this writing, only 11 of the 75 big-ticket projects are under construction. Some 38 projects have secured government approvals, with the bulk remaining on the drawing board, according to the National Economic and Development Authority.

Subscribe to our E-News
to get the latest updates